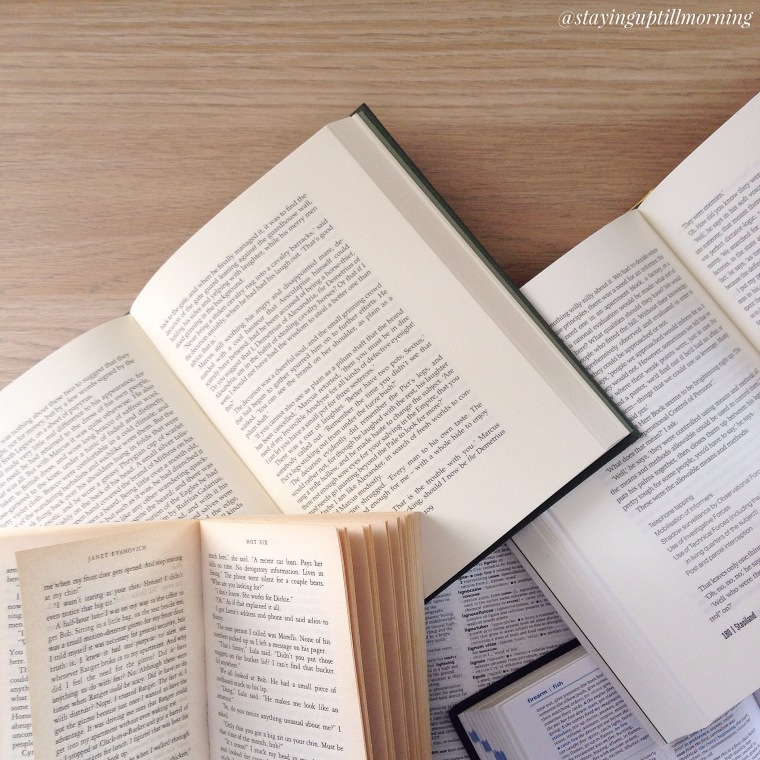 A few days ago I took a look through my goodreads and noticed that I have abandoned a whole lot of book series over the past several years! Most of the time it seems I’ve read book one and then just given up on the rest. And a lot of these books I’ve given 4 or 5 stars so it’s not like it’s because they’re bad. Unfortunately it’s probably due to my refusal to buy a whole series all at once. I’m too scared I won’t like the first book and then I’m stuck with the rest on my shelf just taunting me! (*cough* The Maze Runner) But that means, because I don’t take a chance and invest in the whole series at once, I’ll immediately move on to something I do already own. It’s a vicious cycle that I’m sure all #bookworms know!

So now here I am with a list of 5 series that I will make an effort to finish this year:

| Saba has spent her whole life in Silverlake, a dried-up wasteland ravaged by constant sandstorms. The Wrecker civilization has long been destroyed, leaving only landfills for Saba and her family to scavenge from. That’s fine by her, as long as her beloved twin brother Lugh is around. But when four cloaked horsemen capture Lugh, Saba’s world is shattered, and she embarks on a quest to get him back.
Suddenly thrown into the lawless, ugly reality of the outside world, Saba discovers she is a fierce fighter, an unbeatable survivor, and a cunning opponent. Teamed up with a handsome daredevil named Jack and a gang of girl revolutionaries called the Free Hawks, Saba’s unrelenting search for Lugh stages a showdown that will change the course of her own civilization. |

I read Blood Red Road years ago and gave it 5/5 so I must have really loved it at the time. Only now I’ve forgotten just about everything except that I know I thought the main character was awesome. And I’m pretty certain she ends up in some sort of fighting pit type situation which I thought was fantastic. I love it when female characters are great, skilled fighters. So this is officially the first series I plan to tackle from this list!

| This is a world divided by blood – red or silver. The Reds are commoners, ruled by a Silver elite in possession of god-like superpowers. Until Mare discovers that, despite her red blood, she possesses a deadly power of her own. Fearful of Mare’s potential, the Silvers hide her in plain view, declaring her a long-lost Silver princess, now engaged to a Silver prince. Despite knowing that one misstep would mean her death, Mare works silently to help the Red Guard, a militant resistance group, and bring down the Silver regime. |

Now I didn’t actually enjoy Red Queen that much…butttt I still find myself wondering what happened in the next couple books. Loads of people seem to love this series as well so there must be something good there right?!

3) Scarlet series by A C Gaughen

| Will Scarlet is good at two things: stealing from the rich and keeping secrets – skills that are in high demand in Robin Hood’s band of thieves, who protect the people of Nottingham from the evil sheriff. Scarlet’s biggest secret of all is one only Robin and his men know…that she is posing as a thief and that the slip of a boy who is fast with sharp knives is really a girl. |

I love love LOVED Scarlet! It was such a quick and fun read and all the characters were great and even the love triangle was pretty good. So why didn’t I continue with the series? I couldn’t find the sequel anywhere! My library only has the third book for some reason? And amazon is trying to get me to pay £7.61 for it which is more than what a normal paperback would cost brand new! But now I’m just going to suck it up and get it cause I need to know what happens to Scarlet.

4) You series by Caroline Kepnes

| There is only one Guinevere Beck in New York City. She has a public Facebook account and Tweets incessantly, telling Joe everything he needs to know: she is simply Beck to her friends, she went to Brown University, she lives on Bank Street, and she’ll be at a bar in Brooklyn tonight—the perfect place for a “chance” meeting. As Joe invisibly and obsessively takes control of Beck’s life, he orchestrates a series of events to ensure Beck finds herself in his waiting arms. Moving from stalker to boyfriend, Joe transforms himself into Beck’s perfect man, all while quietly removing the obstacles that stand in their way—even if it means murder. |

You is another book that I didn’t think was perfect. BUT I did enjoy reading most of it. It was just a bit of a slow read so it took me a few more sittings to get through than I’d hoped. And I’m expecting the sequel, Hidden Bodies, to be the same which is what’s been putting me off. I do want to find out what happens though (damn all the books on this list having storylines that are somewhat interesting and then ending on cliffhangers!) and I actually already own it. So no more excuses I will read it this year!

5) After series by Anna Todd

| Tessa is a good girl with a sweet, reliable boyfriend back home. She’s got direction, ambition, and a mother who’s intent on keeping her that way. But she’s barely moved into her freshman dorm when she runs into Hardin. With his tousled brown hair, cocky British accent, tattoos, and lip ring, Hardin is cute and different from what she’s used to.
But he’s also rude—to the point of cruelty, even. For all his attitude, Tessa should hate Hardin. And she does—until she finds herself alone with him in his room. Something about his dark mood grabs her, and when they kiss it ignites within her a passion she’s never known before. |

I read After last year and it is disgusting! I HATE that arsehole Hardin! But I want to read at least one more book in this series to hopefully see Tessa grow a spine and get her own back. Or at least tell him off and dump him for good and then live a happy and successful life without him! If that doesn’t happen though I’m going to pretend this series doesn’t exist anymore…

Have you read any of these? Let me know in the comments below because I could really use a bit of motivation to pick some of them up again. Or let me know a series you’ve left on your tbr list for far too long so I don’t feel as bad!