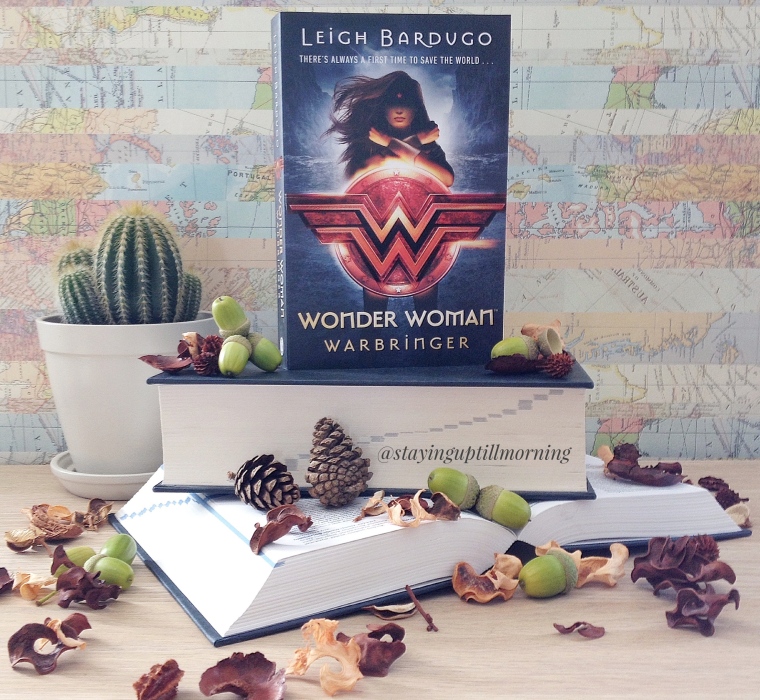 | Princess Diana is desperate to prove herself to her legendary warrior sisters. Alia Keralis just wanted to escape her overprotective brother with a semester at sea. But Alia is a Warbringer, a direct descendant of the infamous Helen of Troy, fated to bring about an age of bloodshed and misery. Together they will face an army of enemies, both mortal and divine, who are determined to either destroy or possess the Warbringer. |

Favourite Quote: “Sisters in battle, I am shield and blade to you. As I breathe, your enemies will know no sanctuary. While I live, your cause is mine.”

Review: Before watching the 2017 Wonder Woman film I knew nothing about Princess Diana of Themyscira. Wonder Woman was never on tv whilst I was growing up and I didn’t, and still don’t, read comics. But the recent WW film meant that I could now declare I had a favourite superhero!

So imagine how excited I was, as a self proclaimed #bookworm, to learn there would be a whole book dedicated to Diana’s story. One that would reveal what Diana was like when she was a teenager.

Then imagine my disappointment when I slowly realised this isn’t even really a Wonder Woman story. At all. It should have just been called Warbringer and then Wonder Woman being in it would have been a nice little extra.

The first and last chapters are Diana’s, I’ll admit, but everything in between is about Alia, who is the “Warbringer” from the title. And even though roughly every other chapter is from Diana’s perspective, she’s definitely a background character. Very nice to everyone, but with an incredibly bland personality. Life on Themyscira is barely touched on and we get no sense of who Diana is as either a person or a teenager.

Instead what we get is every detail of Alia’s school and romantic life, her wants and ambitions. We meet Alia’s friends and brother. A huge section of the story is wasted by being set in New York, Alia’s home town. This would be completely fine…if I wasn’t lured in to reading this book because it promised Wonder Woman!

And whilst Alia did grow on me (eventually). I couldn’t really get past her judgmental attitude from right at the beginning. Diana had just saved her from drowning a few hours earlier and had come back to try and help Alia off of the island, when Alia starts labeling Themyscira “cult island” and a “radical feminist cult” and the women who live there “paranoid survivalists”, “delusional”, “hippies” and “socialists”.  And at one point decides Diana is “queen loon”.

All these labels and insults are thought up by Alia in the space of just 5 pages btw!

Alia is much nicer to her best friend, Nim, though. And Nim is an amazing character. She’s herself and unapologetic about it! So this meant I started to warm up to Alia as well. But then Alia’s arsehole brother, Jason, keeps coming back in to the story and I’m back to loathing everyone and everything again.

But really neither lovely Nim or nice Diana could save this book for me. Which was overall a real hard slog. It felt too much like a slow contemporary ya. The characters say they are in a rush a lot but there’s an awful lot of hanging around, jumping in pools and going to parties. Oh and best of all (not) there’s a bit of romance thrown in, for no reason, between Diana and someone I won’t name. Completely unnecessary!

Basically this was a huge let down after the fantastic 2017 Wonder Woman film. I thought I was getting more of film Diana but instead got Diana relegated to the role of glorified bodyguard for a rich girl with a private plane. And see at the top of this post where I’ve written some of the synopsis from the back of the book? It says Diana is “desperate to prove herself to her legendary warrior sisters”. SPOILER ALERT She doesn’t…!